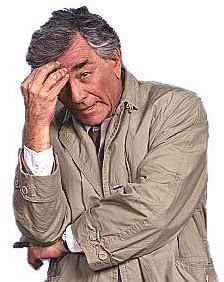 Someone has to ask them. Apparently no one else in the (still inchoate) anti-Islam movement seems to care about the virtue of transparency among our influential, if unofficial, representatives and voices when they seem to have major rifts which obviously would tend to entail impairment, of one degree or another, of optimal cooperation amongst them in the interest of the movement in which all of us have an exigent stake.

Mid-day yesterday, Robert Spencer published a farewell piece devoted to Hugh Fitzgerald. Mostly, it read as a heartfelt encomium including much appreciation for his literary and analytical talents.

However, some nagging questions remain, unattended by Spencer's tribute:

1) Why did it take Spencer this long to publish a tribute like this? Of course, it's always possible that this moment just happened to be the moment when everything had devolved to the point where Spencer saw fit to publish it, and no moment before was appropriate; but it seems odd that this tribute only comes after some Jihad Watch readers began raising questions about Hugh's curious absence (and after I published my own essay about this matter early yesterday morning). Had these questions never been raised, would we have seen a tribute at all from Spencer, or would he have continued, as he has already for months (Spencer in his tribute mentions, in typically cryptic fashion, that he "tried to stave off this day for a year and a half"), coasting along thinking he can get away with leaving it unmentioned and none of his readership would notice.

2) Why has Spencer removed Fitzgerald's blog, the New English Review, where he has written copiously, and continues to publish? As I noted in my previous article, Hugh Fitzgerald: another fleeting glimmer of the hallowed interiors of the Gentlemen's Club, Fitzgerald's blog is no longer on the blogroll of Jihad Watch -- but it was there approximately a year ago, October of 2009. This particular question becomes all the more acute when Spencer in his tribute writes:

Hugh will be writing for other publications, and I strongly urge you to seek out his work, as he is a singular voice...

The appropriate thing for Spencer to have done at that juncture would have been to provide a link to the major source of Hugh Fitzgerald writings, and his failure to do so is odd. But he won't, because for some reason known only to the Gentlemen's Club, Spencer has seen fit to remove that source from his blogroll. Spencer does, however, go on to link to Fitzgerald's writings preserved in Jihad Watch archives and encourages the reader to read at least one every day. Thus Spencer is using Fitzgerald's popularity in order to boost his own website, even while remaining uncharitably remiss in directing readers to Fitzgerald's blog! Spencer seems to be a master of silky chutzpah.

3) The third nagging question harks back to what I plumbed meditatively in my older essay, Hugh Fitzgerald: Man of Mystery -- namely, concerning Fitzgerald's preternatural degree of reclusive privacy rivaling J.D. Salinger, Howard Hughes and the Phantom of the Opera all combined. Spencer in his tribute once again disinters, in order to lay to rest, the old rumor that he and Hugh must be one and the same:

Hugh Fitzgerald is a deeply private man, and has made few public appearances.

At least of the aforementioned legendary recluses photographs and even film footage exist. We have not one measly photograph -- not even blurred and grainy in washed-out sepia tones -- of Hugh Fitzgerald. Moreover, in times past when Spencer tried to dampen the rumors that he and Fitzgerald were really one person split into two personas, he and occasionally one or another individual would hasten to declare that in fact Hugh Fitzgerald was at some public event. They never produced proof of this in the form of a roster, or (God forbid) a photograph, or even an actual speaking engagement or participation in a round-table. Such assurances that "Oh yes, Hugh was there" began, over time, to sound like Elvis sightings. I for one do not doubt that Hugh Fitzgerald and Robert Spencer are two different individuals; but just as with the nagging unease the American public has with Obama's citizenship, the persistent rumor could be dispelled immediately and with infinite ease, by producing the kind of unremarkably banal evidence that virtually everyone -- particularly people involved in public movements -- has about themselves.

Well, there you go. Some nagging questions not only unallayed by Spencer's belated tribute, but positively stimulated by it. They leave the reader with a sense that the whole story has not been told, and that some ideological differences at least contributed to Hugh's departure. It can't all be about simple money, can it?

All these questions and speculations, however, would vanish -- voilà! as Spencer likes to say about our concerns about Muslims -- were the individuals involved in these rifts (Barony Bodissey & Dymphna, Diana West, Andrew Bostom, Hugh Fitzgerald -- and, par excellence, Spencer himself) to bring them out into the air and sunshine of mature public discussion. The anti-Islam public -- who have supported them and helped their growing attainment of popularity and money -- deserve no less.
Posted by Hesperado at November 25, 2010

As far as I know, from the beginning of Jihadwatch journey Hugh Fitzgerald was the board member of Jihadwatch. He served as the perfect foil for Robert Spencer over the years to expose Islamic Supremacy. As compared to Robert Spencer who sometimes I feel is a bit soft on muslims, Hugh Fitzgerald had the best solution in mind to the problem of Islam by expelling Muslims en mass from Infidel societies. I think he deserved as much respect as anybody in the anti-Islam movement, and as a longtime contributor to Jihadwatch that respect is due. I think Robert Spencer should put up a link on Jihadwatch homepage highlighting the contributions Hugh has made over the years to the anti-Islam movement and Jihadwatch.

"As far as I know, from the beginning of Jihadwatch journey Hugh Fitzgerald was the board member of Jihadwatch."

Here's the indisputable proof of that. Six years ago, on Nov. 7, 2004, Robert Spencer wrote:

I am pleased to announce that Hugh Fitzgerald has accepted a position as Vice President of the Jihad Watch Board of Directors.

As for Hugh's relatively tougher stance than Robert, I agree, though Hugh in my estimation didn't go far enough, and as a result tended to keep his analyses in a suspension of incoherence. Example, he liked to cite the mass expulsion of German Czech citizens from Czechoslovakia at the end of WW2 as a model for what we can do about Muslims, but every time he mentioned it, he would couch it in terms of expelling non-citizens, when the whole point of the Czech expulsions was that over a million Czech citizens were expelled from Czechoslovakia (and many of them with roots in Czechoslovakia going back many generations), at a time when Czechoslovakia was a progressive democracy.

For this reason and others, I found Hugh to be an acutely asymptotic analyst of the problem of Islam -- by which I mean, he seemed incapable of uttering the words "all Muslims". Sooner or later, the West is going to realize that it cannot manage the problem of Islam without treating Muslims collectively and prejudicially (i.e., treating them as all equally dangerous).

So yes, Hugh is closer than Robert; but he's still no cigar.

My now retired blog, "Jihad Watch Watch", had a few essays on what I thought were deficiencies in Hugh's analyses. In this link most of them are enumerated:

^^^ This was after WWII, so @ the time in question, Czechoslovakia wasn't a progressive democracy, it had been occupied by the Soviets and was a Communist dictatorship. The communists never had any qualms about expelling populations that they didn't like - just look @ the Soviet Union. They'd expel a whole bunch of ethnicities from various places, like Ukraine, Crimea, Russia, et al. So after the war, the Communist regime in Czechoslovakia conveniently expelled the Germans, even though they faced no threat, as East Germany was as much a vassal of the Soviets as was Czechoslovakia itself, and the Communists believed in an Internationale ideology, not a nationalist one.

This would be a pitfall of using the Benes decree in public, but other than that, the idea of expelling all Muslims, once society recognized them for what they were and are, is the only logical one

Actually, from what I understand, the Communist takeover did not occur right away, and there was a brief window of time in the immediate aftermath of WW2 when enlightened democrats (albeit some of the "socialist") were influential in, if they did not actually govern, Czechoslovakia.

A few years ago in JW comments, I literally provoked and prodded a debate on this issue between Hugh Fitzgerald and a very intelligent guy I knew from a philosophy discussion forum who was also a typical Leftist dubious of the anti=Islam movement and who disputed Hugh on the Benes Decree expulsions. This guy usually went by the nickname "Anonymous". One of the arguments of Anonymous was just what you mentioned, but Hugh disputed that and claimed that the Czech architects and supporters of that Decree were enlightened liberal (if perhaps "socialist") democrats. It was only in 1947 when Russia literally invaded and occupied Czechoslovakia (no doubt with the collusion of certain Czech elements), an occupation that lasted approximately 40 years.

I just came across this old essay of mine in my archives where in great detail and length I critiqued one major, in estimation, flaw in Hugh Fitzgerald's analysis: