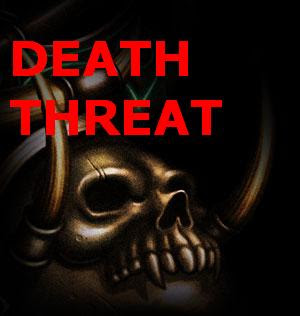 Here is a partial list of the violent intimidation Muslims around the world have been threatening and/or perpetrating in the last few years, all in the name of their religiously pathological abhorrence of "blasphemy" along with their utter disdain for the right of free speech in a free society:

Nakoula Basseley Nakoula, the producer of the recently controversial film about Mohammed ("The Innocence of Mohammed") and members of his family have been advised to go into hiding after two different clerics issued death fatwas against him and after the leader of Hizbollah, before a crowds of tens of thousands of Muslims, vowed that the release of the film will have "dangerous, very dangerous repercussions around the world" -- all this in the context of worldwide Muslim rage in the week following September 11, 2012, in the form of riots frothing with hatred and bristling with violence that have killed at least 20 people by now in various countries

French newspaper (after being firebombed for printing a cartoon of Muhammad, the next day the paper prints that cartoon again, and more! Bravo!)

Hollywood (self-censors by canceling a movie project about Jews in Malmo, Sweden, after learning of frequent Muslim threats and acts of violence against Jews in Malmo)

Paris Dipersico, author (beaten by two Muslim men for writing things "against Islam," such as "Islam is a religion of 'peace', and Muslims will kill you to prove it")

Director of the museum in the Hague, Wim van Krimpen (self-censors in response to Muslim death threats)

UK religious studies teacher Gary Smith (Muslims hit him over the head with an iron bar, fracturing his skull, hemmorhaging his brain, breaking his jaw, and slashing his face, for not teaching Islam as they deem appropriate)

State Senator Greg Ball (receives suspicious package with greeting "Asa Lamu Laikum Dead Man Walking," (the first part of which is Arabic for "peace be upon you")

The firebombing of Riverdale Press, in the Bronx in New York City in 1989, after that newspaper had published an editorial defending Salman Rushdie
French singer Veronique Sanson (self-censors in response to Muslim death threats)

Author Salman Rushdie (in hiding after years of death threats and mass demonstrations by Muslims to kill him for the crime of "blasphemy", under UK govt. protection)

British teacher arrested for the crime of "blasphemy" by the Sudan government, Muslim crowds and clerics call for her death

Novelist Humayun Azad (death threats from Muslims, an assassination attempt in 2004, then later that year a suspicious death which his father insisted (reasonably) was a successful assassination by the same Islamists who had been threatening him and tried to kill him before).

Cartoonist Kurt Westergaard (almost killed by a Muslim with an axe)

Magicians/comedians Penn and Teller (admit they are afraid to mock Muslims for fear of death, even though they continue to mock Christians without any fear)

Death threat at a public auditorium (Queen Mary College, London, in January of this year, where a Muslim stood before the audience and filmed them prior to start of lecture on sharia law -- then announced he will track down any audience member who says a negative word about "the Prophet".  The Muslim also filmed students in the foyer and threatened to murder them and their families. Lecture was canceled.)

As I noted in my intro, this is only a partial list, spanning only the couple of decades.  Many more such examples of the thuggery and intimidation which the pathological social disease called Islam cultivates may be adduced -- and these are all happening mostly in the West. In addition, probably thousands of similar cases are left undocumented, or poorly documented, in various Muslim and non-Muslim countries outside the West, where non-Muslims (Christians, Jews, Hindus, Buddhists, pagans, and atheists) as well as Muslims deemed to be insufficiently "pure" live in constant fear of the totalitarian hatred of Islamic society, when they are not lynched and murdered.

(Thanks to the commenter "traeh" for providing this list which he has developed for his blog, Quoting Islam)

I like Charlie Hebdo re-publishing those cartoons, & more after their offices were firebombed. If only everyone, or at least most, would react that way.

I agree on the face of it; however, the issue is rather complex, and I may articulate it in an upcoming essay.