Another sacred cow down the drain 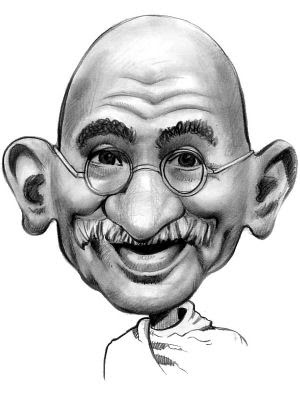 The Gandhi nobody knows

by Richard Grenier
Commentary
March of 1983


Two quotes from Grenier's relatively long essay to entice the reader (with some commentary, pun intended, by me before the second one):

"I cannot honestly say I had any reasonable expectation that the film would show scenes of Gandhi’s pretty teenage girl followers fighting “hysterically” (the word was used) for the honor of sleeping naked with the Mahatma and cuddling the nude septuagenarian in their arms. (Gandhi was “testing” his vow of chastity in order to gain moral strength for his mighty struggle with Jinnah.) When told there was a man named Freud who said that, despite his declared intention, Gandhi might actually be enjoying the caresses of the naked girls, Gandhi continued, unperturbed. Nor, frankly, did I expect to see Gandhi giving daily enemas to all the young girls in his ashrams (his daily greeting was, “Have you had a good bowel movement this morning, sisters?”), nor see the girls giving him his daily enema. Although Gandhi seems to have written less about home rule for India than he did about enemas, and excrement, and latrine cleaning (“The bathroom is a temple. It should be so clean and inviting that anyone would enjoy eating there”), I confess such scenes might pose problems for a Western director."

Concerning the problem of Muslims in pre- and post-Independence India, however, Richard Grenier seems curiously to lapse into the "cycle of violence" mentality and cannot see beyond the Muslim-vs.-Hindu carnage that ensued after the British left to the likelihood that, if Hindus did derail into massacres of Muslims, it was only because of Muslims doing the same to them not only at that point -- but for centuries (some historians estimate Muslims massacred over 60 million Hindus during the epoch they colonized India -- long before the British were even in historical underpants, as it were).  And even so, I'm not entirely sure Grenier is correct about the equivalency he is blandly assuming: does he have actual proof of a roughly 50/50 violence going on between Hindus and Muslims?  And does he have actual proof of what he is so breezily implying, that both sides simultaneously attacked each other, rather than one side -- the Muslim side -- perhaps provoking the other side (which would not be an unreasonable assumption, given what Muslims are doing in various parts of the "bloody borders" they share with others around the world, a belligerent behavior that is scripted in their holy texts and which they have been pursuing for centuries)?  Grenier's narrative has the aura oddly resembling what we routinely hear when learned analysts describe the "Palestinian" conflict, or the Balkan conflict -- where, if we must include Muslims in our analytical blame, then we only do so at the cost of sucking in the other side for equal blame -- almost as though there were some axiom at work floating up in the air that dictates the description, not actual historiography on the ground.

Let that caveat lector stand, at any rate, as we read a snippet from Grenier's otherwise refreshing corrective to the historical revisionism (not only of Attenborough's popular movie, but of most history bandied about whether in colleges or in glossy coffee table books or on PBS specials) about British colonialism and the India that, after the British left, unraveled principally due to Gandhi's reckless demagoguery:

"Although the movie sneers at this reasoning as being the flimsiest of pretexts, I cannot imagine an impartial person studying the subject without concluding that concern for Indian religious minorities was one of the principal reasons Britain stayed in India as long as it did. When it finally withdrew, blood-maddened mobs surged through the streets from one end of India to the other, the majority group in each area, Hindu or Muslim, slaughtering the defenseless minority without mercy in one of the most hideous periods of carnage of modern history.

"A comparison is in order. At the famous Amritsar massacre of 1919, shot in elaborate and loving detail in the present movie and treated by post-independence Indian historians as if it were Auschwitz, Ghurka troops under the command of a British officer, General Dyer, fired into an unarmed crowd of Indians defying a ban and demonstrating for Indian independence. The crowd contained women and children; 379 persons died; it was all quite horrible. Dyer was court-martialed and cashiered, but the incident lay heavily on British consciences for the next three decades, producing a severe inhibiting effect. Never again would the British empire commit another Amritsar, anywhere.

"As soon as the oppressive British were gone, however, the Indians—gentle, tolerant people that they are—gave themselves over to an orgy of bloodletting. Trained troops did not pick off targets at a distance with Enfield rifles. Blood-crazed Hindus, or Muslims, ran through the streets with knives, beheading babies, stabbing women, old people. Interestingly, our movie shows none of this on camera (the oldest way of stacking the deck in Hollywood). All we see is the aged Gandhi, grieving, and of course fasting, at these terrible reports of riots. And, naturally, the film doesn’t whisper a clue as to the total number of dead, which might spoil the mood somehow. The fact is that we will never know how many Indians were murdered by other Indians during the country’s Independence Massacres, but almost all serious studies place the figure over a million, and some, such as Payne’s sources, go to 4 million..."

And what Grenier has to say about Gandhi and Hitler and the Nazis will really disabuse my readers of any shred of admiration they may still be clinging onto for that deranged megalomaniac who still -- to this day -- remains so obtusely and insanely beatified by the vast majority of Westerners.
Posted by Hesperado at October 18, 2012

Hindu activists have always loathed Gandhi, and it's nice to see others catching up & understanding why, instead of just swallowing Richard Attenborough's puff pieces. Do you recall a Nepali poster Gorkhali on what he used to post on JW regarding Gandhi? A lot of that is simply damning - not only this aspect that you describe, but also that in his book, he referred to South African blacks as Kuffars, and supported a Califate in 1919 at the end of the first World War.

Yes, Grenier goes into Gandhi's support of the Caliphate, and mentions that this was the inspiration and goal of Indian Muslims. What I find implausible, though, is Grenier's breezy assumption that Arabs and Turks were happy to see the Caliphate dismantled. Once again, in that regard, Grenier shows his axiomatic ignorance of Muslim culture and mentality. Grenier would be confusing the perennial internecine bickering Muslims indulge in (where Arabs may well have resented the Turks) with some kind of fundamental position on Islamic disunity.

The reactions of both the Turks and Arabs to the end of WWI was conflicted. The Arabs obviously believed that only one of them could be a Caliph, and that the Turks were upstarts, while the Turks, having lost a war and their entire European empire, didn't mind seeing their sultanate overthrown.

Kemal's success in coming to power may have demonstrated that a mere invocation to the Caliphate may not have been adequate, but as history shows, Kemal had to really suppress Islam forcefully in order to get Turkey on a quasi-modernization path. (He might have succeeded had he replaced the cult of Islam w/ the cult of not himself, but that of a free Western renaissance, like had happened decades ago in Europe)

The Arabs, OTOH, were happy to rebel against the Turks, and Lawrence of Arabia took advantage of their resentment to encourage them in their revolt. However, the replacement in some countries of Turkish Muslim colonialism w/ European non-Muslim colonialism - even if the Brits & French made no attempt to Christianize Egypt, Syria, Palestine/Transjordan or any of those areas - caused the rise of groups like the Muslim Brotherhood. It's worth noting that it was not born in Saudi Arabia, where the Brits were happy to leave the Sauds in power: it was born in Egypt, which was under British colonial rule for a short while.

So while the Arabs may have had their own resentment against a Turkish Caliphate, they certainly preferred it to a British colonial presence in the country, which after independence was briefly a monarchy, before Nasser seized power, and then the Jihad was one against Nasser, who himself was Judeophobic.

However, back to Gandhi - he stupidly thought that he'd win the support of Muslims by backing them on the Caliphate issue, but truth is that few Indian Muslims really cared about it. Indian Muslims were descendent of the Moghuls, who in turn were originally from central Asia & Afghanistan. While the Moghuls were of Turkic origin, they diverged somewhat from the Ottoman Turks who ravaged Europe, and so it was silly to expect them to throw their lot behind a foreign Muslim power that they hardly knew of at the time, when the tools of international dawa and oil money was just not there to bankroll a global ummah.