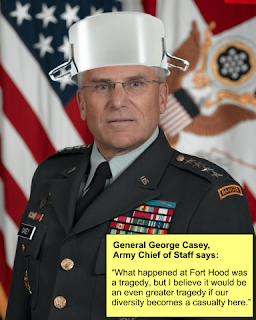 "I am totally flummoxed as to how can people be so blind to the Islamic supremacy threat."

His flummoxed feeling was prompted by yet another story on Jihad Watch documenting the clueless West in the face of the increasing danger of Muslims; and this feeling of head-scratching bafflement I have seen expressed by many in the still inchoate Anti-Islam Movement.

Being totally flummoxed is a good start toward arriving at a reasonable hypothesis to explain this seemingly bizarre anomaly. Moreover, the flummoxation increases when one factors in that these "people" who are so blind are, on the whole, relatively good, decent and intelligent people -- apparently in the majority among Elites and ordinary folks alike throughout the West. Moreover, they are not all "Leftists" or "liberals": many of them are "conservatives". And the societies in which their views are nourished, and to which they symbiotically contribute by their participation, are relatively healthy, free, democratic societies (i.e., societies of the modern West).

So where does that bring us?

In order to decrease the pressure which this anomaly exerts on logic -- for we as rational beings seek explanations for oddities, and this particular oddity is not only a doozy, it is serving to endanger our lives and the lives of our loved ones -- we must first eliminate explanations that don't make sense, or that go against certain non-negotiable axioms:

1) The blind people are a small minority who hold extraordinary power over the masses and over most structures and institutions of society and culture throughout the West.

Problem: how could people so blind -- and therefore ignorant and stupid -- have so much power? Doesn't make sense (unless the society in question is a totalitarian society, which only alienated Gnostic conspiracy theorists -- on both the Left and the Right fringes -- consider the West to be).

2) The blind people are not blind, they are evil -- protecting Muslims for reasons of greed or power while knowing that Muslims endanger us and that Islam is evil.

Problem: this implies that a cabal of evil people could be "really" pulling the strings and controlling our free and democratic societies along with most structures and institutions throughout the West. This is conspiracy theory, and Gnostic to boot, and therefore is not a permissible theory.

3) The blind people are not so much blind, as simply temporarily ignorant of the enormity of Islam: all that needs to be done is direct their attention to the text of the Koran, a few choice Hadiths and Tafsirs, and a few articles at Jihad Watch -- and voila! -- their eyes will be opened and they will join the Anti-Islam Movement.

Problem: This is a nice-sounding theory, but not very plausible, and flies in the face of experience too many of us have had when we see what people do when, in fact, their attention is apprised of the facts of Islam, and yet they still continue to regurgitate and parrot various defenses of Muslims and of Islam. Apparently, then, for a good number of people, a mere acquaintance with the facts of Islam is not sufficient.

A reasonable hypothesis to explain why the West persists in seeming to be blind to the danger of Muslims and of the Islam that makes them dangerous must rule out as primary explanations the following:

1) a blind and stupid minority in power, holding a putatively Islamorealist vast majority of ordinary folks in its thrall

2) an evil minority in power, holding a putatively Islamorealist vast majority of ordinary folks in its thrall

3) people in positions of influence and power who are simply innocently unaware of the facts of Islam, and the instant someone calls their attention to those facts, they would wake up and join the Anti-Islam movement.

Given the nature of the overall problem, then, the only reasonable hypothesis would have to be that relative sociopolitical health and intelligence is conducive to this persistence in being "blind" to the danger of Islam. I.e., relatively decent and intelligent people, in their decency and intelligence, maintain the position that continues to defend, rather than appropriately condemn, Islam and the Muslims who follow Islam.

How can this be? The answer lies in the content of that decency and intelligence. Among other things, to be decent and intelligent in our current Western era is to be "not prejudiced", "not bigoted" and "not racist". 90% of the time when Muslims come to our visual attention, they look like Ethnic People. This visual cue exerts an instant psychological trigger on the post-modern Westerner of the latter half of the 20th century and into the 21st century: instantly, before even conscious thought and deliberation can kick in, that visual cue pushes the buttons in the post-modern Westerner of the anxious concern to avoid prejudice, bigotry, hate and racism, and instead to make sure to support diversity and tolerance.

Then, when that post-modern Westerner factors in the massive fact of the sheer numbers (not to mention the colorful ethnic diversity) of Muslims worldwide, he feels an additional frisson of hideous repulsion at the thought of being bigoted against such vast multitudes of ethnic peoples.

Furthermore, this post-modern Westerner has been indoctrinated in the revisionist history whereby he has learned that only the white West has been guilty of crimes of racism and ethnic cleansing, if not wholesale genocide, of ethnic peoples throughout history, and that ethnic peoples, by contrast, are as innocent as gazelles on the savannah by nature the prey of the evil White Lions who went colonizing and raping the Third World. The self-understanding of the evil of his own West possesses additional more recent ballast in groups such as the KKK, Aryan Nation, Neo-Nazis, and of course the not-so distant memory of Hitler which ever reminds of the "Never Again" mantra of avoiding "another Holocaust" -- with a "Holocaust" tendentiously defined as the kind of crime that only white Westerners could commit, and against some kind of minority, the browner the likelier.

The sincerely righteous sense of morality of this post-modern Westerner is intelligent -- intelligently informed, or deformed, by the framework of a rather complex paradigm which includes among other things what I have articulated above:

2) a concomitantly excessive and morbid self-criticism of the West

3) part and parcel with 1 and 2, a revisionist history of the West.

With these attitudes exerting force, a curious and perverse mechanism comes into play, which recalls Lawrence Auster's First Law of Majority-Minority Relations:

The worse any designated minority or alien group behaves in a liberal society, the bigger become the lies of Political Correctness in covering up for that group.

What Auster has not sufficiently explained, though, is why one particular designated ethnic minority, Muslims, have astronomically surpassed all other ethnic minorities in terms of enjoying the perverse privileges described by this law. The explanation is implicit in his First Law, since Muslims by their expressions and behaviors serve to augment and exacerbate the crucial "worse behavior" factor in that Law's formulation.

Muslims are more violent than any other designated ethnic minority.

a) Quantitatively: Muslims are by far more violent -- both in terms of sheer numbers of acts of violence and the geographical dispersion of violence over the globe -- than any other designated ethnic minority (even blacks, whose putative problem of violence Auster spends a lot of time discussing and documenting on his site, pale (pun intended) in comparison to Muslims by an astronomic factor).

b) Qualitatively: Muslims are not only astronomically more violent quantitatively, their violence is qualitatively more gruesome (e.g., beheadings, mutilations, torture) and deadly (e.g., mass explosions, mass raids or razzias as seen in Mumbai, the potential for deployment of WMDs of various kinds, etc.).

c) Networking Capability: Aside from quantitative and qualitative violence that astronomically exceeds the violence of any other designated ethnic minority, there is the greater capability Muslims possess to deliver on threats of violence -- demonstrating the fanatical will to do so as well as greater sociological support among fellow Muslims, and international networks to actualize that support.

Aside from the violence factor, the sheer numbers and global dispersion of Muslims tends to lend additional weight to those who have an aversion to being "prejudiced" and "bigoted" and "racist" against a perceived ethnic people. The strong critic of Islam instantly becomes a person arraying himself against an Entire People hailing from all over the world, by the hundreds of millions: a majority of them (much less all of them) can't possibly be dangerous -- therefore they aren't; is the logic.  And when that Entire People is perceived to be Ethnic, that clinches the deal: the Islam critic must be a "racist" "hater" and any data he brings to the table must be ignored since it is axiomatically prejudged that any and all such data must be tendentiously supporting that "racist" "hatred".
Posted by Hesperado at March 02, 2010

I apologize for my inappropriate responses while at JihadWatch.

Though I felt justified at the time and under the circumstances, I am not now attempting to justify what I realize were somewhat inappropriate responses.

You were incorrect in thinking that I have "sinister" motives. I felt personally attacked, and I responded in kind.

Your analysis here is good in several regards.

As a person whose profession involves working with others and leading them, I am embarassed by how things got out-of-hand.