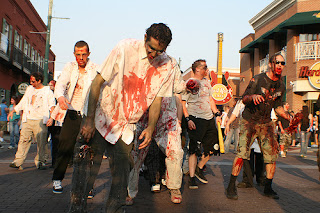 From a recent report from Reuters (relayed by Jihad Watch):

Egypt’s President Mohamed Mursi has freed a group of Islamists jailed for militancy during Hosni Mubarak’s era, a step seen as a gesture to hardliners who supported his presidential bid.

And who were these "Islamists" freed by the newly elected, "democratic" President of Egypt?

Those released in recent days include members of Al Gama'a Al Islamiya, jailed during the group's armed insurrection against the state in the 1990s, and Islamic Jihad, the movement behind the 1981 assassination of president Anwar Sadat.

Surely 1997 isn't so long ago, is it? I know our collective memory is short, and we've already put 911 long behind us, but surely we can close our eyes, concentrate, and try to go back a mere 15 years. That was the year of the massacre of tourists in Luxor, Egypt, by Muslims who happened to have been members of Al-Gama'a al-Islamiyya.

From a BBC retrospective published in 2002 on that massacre:

... The attack took place at the Temple of Queen Hatshepsut, one of Egypt's best known tourist sites. There was only one armed guard at the temple. No resistance was met by the six young gunmen as they unleashed a hail of bullets [using machine-guns, I might add].

The tourists had little chance of escape. Four Japanese honeymoon couples, 36 Swiss and three generations of a British family from Yorkshire including a five year old girl, were among the victims.

And here's another report of the Luxor massacre:

Badawy Ahmed Salem, 33, a cab driver, said the gunmen fired at tourists on every level of the temple. "Then they started getting out knives and stabbing people," he said. "They were pulling tourists like sheep on the floor and slaughtering them. We were up to our knees in blood. Even those who did not die will be dead psychologically."

Police exchanged fire with the gunmen, killing one at the scene while the rest fled in a commandeered bus. Over the course of the next several hours, police killed five more gunmen when they sought refuge in nearby desert, authorities said.

The attack was the most lethal incident of violence in Egypt since Islamic fundamentalists launched their campaign to topple the secular, military-backed government of President Hosni Mubarak in 1991.

About 25 people, 16 of them foreigners, were wounded in the attack. Many of the injured were evacuated by air ambulance to Cairo.

I.e., the Muslim mass-murderers that day were intent on killing far more than the eventual death toll of 58.

While various MSM reports at the time and in retrospect claim that the Islamic terrorist group Al-Gama'a al-Islamiyya soon thereafter "reformed" itself and "renounced violence", this is egregiously misleading: What actually happened was that Mubarak cracked down on them so hard (including exile, indefinite imprisonment, and doubtlessly horrible torture in prison), that they pretended to renounce violence, and hunkered down to wait for the day, the day which would surely come -- Inshallah! -- when the True Believers would topple this un-Islamic tyrant Mubarak and bring back true Islam!

And lo and behold, that has come to pass with the recent revolution and the Arab Spring; and with the blessing, no less, of the President of the United States, the majority of clueless Republicans, and the vast majority of even more benighted Democrats -- along with, of course, nearly the entire news media of the West, not to mention probably most Ordinary People throughout the West into whose thick skulls one would try to knock some sense, to little avail.
Posted by Hesperado at August 01, 2012

Thanks Olave, I'll check it out.